If Life Had a Point, Would I Get Stabbed?

It’s getting to be that time of life when I’m increasingly unlikely to be discovered as a child prodigy. I’ve come to terms (all too easily) with the fact that I will never be the world’s greatest [whatever]. I couldn’t even be the greatest [whatever] in town, unless I go to a very small town. Hmm… 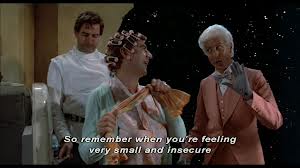 The Galaxy Song by Eric Idle, from Monty Python’s “The Meaning of Life”

So what’s the point of it all? I’m not carrying the torch, or walking in anyone’s footsteps, or passing on my genes (well, I suppose it’s never too late for that. I don’t even have to be conscious to pull that off. Indeed, I wouldn’t even have to be alive.) Nothing I do is going to alter history and change the world. Except, as Gandhi said, I can be the change. And that may sum me up: a bit of change. Loose change in the pocket of the universe.

But that’s all any of us—from Aristotle to ZZ Top—can ever be. And I’m fine with that. Which is why I am a registered organ donor.

So whether your shortcoming is that you think you’re a big deal or that you feel like a meaningless speck,

consider the scale of the universe and the words of astrophysicist Dr. Neil DeGrasse Tyson: “the universe is in us”. Join him in recognizing “my atoms came from those stars”.

Ignorance is not always bliss. Sometimes bliss comes from learning. I remember wondering, in my youth, what the appeal of wine was. I remember believing that cheese was the powder that came in the box of macaroni. Now I’m older and wiser, and fatter and drunker.

There are countless paths into the twin gardens of wine and cheese. Options are almost endless. When John Cleese finds his first three requests unavailable at the cheese shop, he asks for 40 other kinds, and that’s just the tip of the Jarlsberg. I think it is very likely that Monty Python‘s “Cheese Shop” sketch was what prompted me to begin exploring cheese.

Here are some cheesy words you may not need…

To read some other tips I’ve picked up over the past quarter century of self-indulgence, please read this short piece I wrote for Post City. http://www.postcity.com/Eat-Shop-Do/Eat/March-2012/The-Wine-and-Cheese-Show-is-in-town-Herewith-a-crash-course-in-becoming-a-connoisseur/

And here’s one I wrote after sobering up from a wine tasting last year. And then there’s sake.